AUD/USD is showing signs of market exhaustion after a steady upwards momentum sustained from the beginning of this month. Presently trading at around 0.9380, it would seem fairly probable that this week will end on a well-defined pinbar after forming a three inside down bearish candlestick pattern on the daily charts. 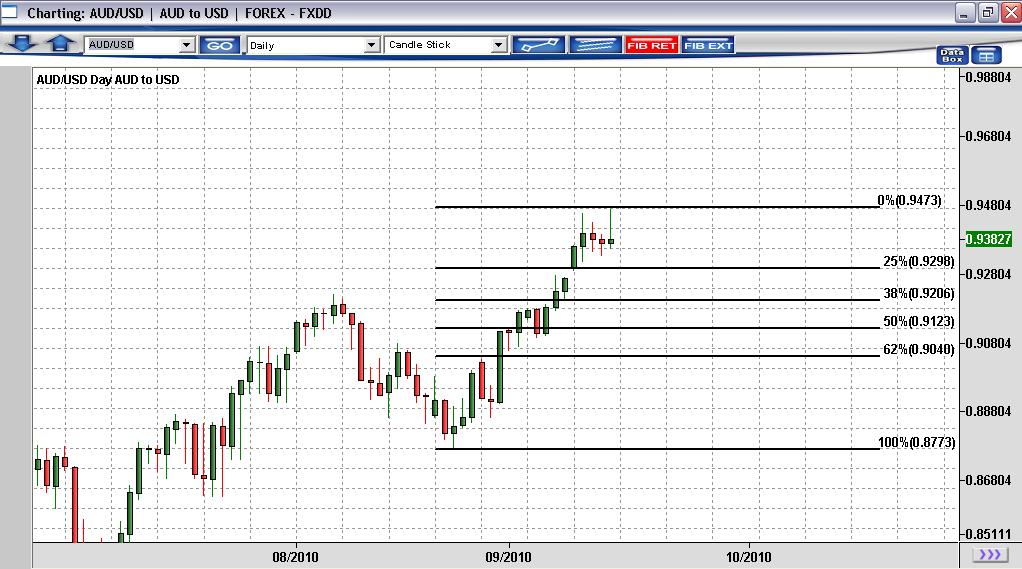 Gold surge and successive break of higher highs along this month gave the Australian currency a strong impulse. However, today’s sharp pullback due to a weekly profit taking seems to have brought AUD/USD into a pause mode. The precious metal is trading inside an ascending wedge, which is a bearish pattern, and we could probably see a retest of the highs and further pull back down after a double top, although the psychological 1.3000 figure looks extremely tempting and bulls could setup for a quick push before making any significant retracement.

The Aussie has been steadily ascending inside a channel, with a projected scope to the upper trendline between the 0.9550/0.9670 range. Presently trading at pivot level, and below the 1.5 deviation of Bollinger Bands, it would seem that a consolidation phase has begun after a rejection from first level of resistance, and could be poised for a regression to the median line running now at around 0.9120 which is also the daily first level of support. My medium-term views are for a retracement to the SMA20 median band, as it also coincides with a 25% fibonacci fan retracement of the whole last two months upmove on daily charts, and the baseline of the rising channel, along with a 50% retracement over last swing high. However, I will have to keep an eye on Gold actions to anticipate any further moves over next week.

Short-term, a first retracement to 25% of the most recent daily upswing which is also near the 0.9300 round number, and a continuation of the consolidation between this level and the recent highs. Then I would expect a push to test the break of 0.9200 and 38.2% retracement.