The Euro-Dollar kept trading lower as expected last week, breaking below its previous weekly lows and nearly reaching the SMA200 level, while on daily charts we can appreciate an extension of its swing low to the 138.2% Fibonacci level, closing above the round number 1.4100 at the end of the week.

Since Sunday open, there has been some struggle at the 1.4050 support and price retraced half of last week’s move, however the market looks still bearish and I would expect a further fall to the 161.8% daily extension at around 1.3940 as first target, and secondly a test of support at 1.3850/60 which also coincides with the 138.2% bottom extension on the previous weekly swing high range. Should we bounce back to the upside, I would be targeting the confluence of the daily SMA34 and middle line of the Bollinger bands at around 1.4480/1.4500. 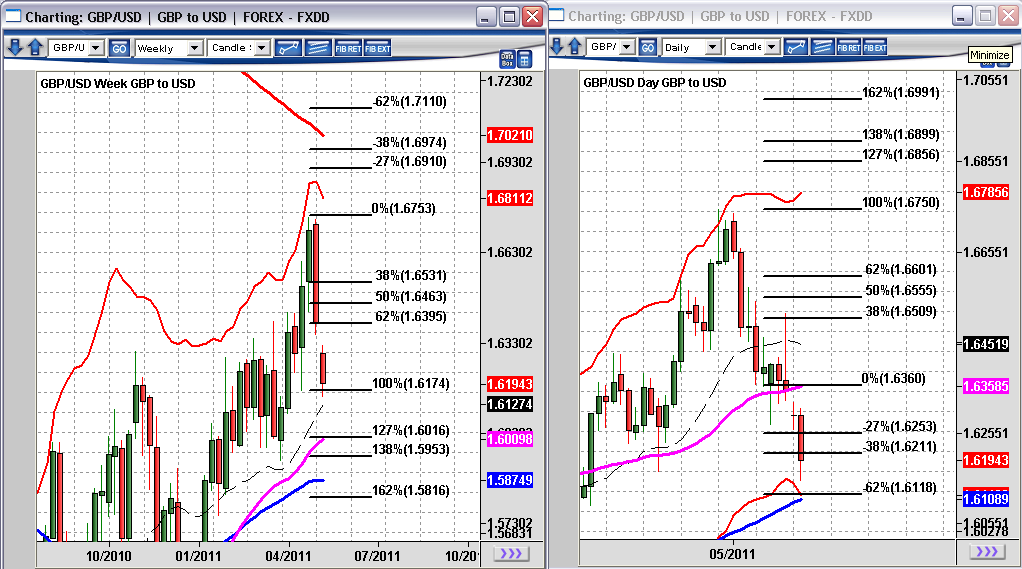 The Pound Dollar has exhibited a similar behaviour to that of the EURUSD and gave back all its gains in regard to its previous weekly swing high, reaching near the middle line of the Bollinger bands. On daily the price fell towards the 161.8.% extension on the swing low, quite close to the SMA100 level, under which it is presently trading and which seems to be holding well as resistance. We are still aiming to reach level 1.6000, where the daily SMA200 is now lying, and from which we can expect later on a bounce back for a retest of the actual level, should it be broken. A second bullish target could be at around 1.6360 on the daily SMA34 and near the 38.2% retracement on the downwards weekly move. The Euro-Pound fell a little bit more as expected, almost reaching the 127% Fibonacci extension on the daily swing low. However and despite a huge bearish engulfing candle it spent the last two days of the week inside its range, a move that has continued unchanged since Sunday open. Price is presently trying to break the resistance level at around 0.8740 and weekly moving averages are turning to the upside, 0.8670 seems a good support and we could see a turn back to the highs or at least to 0.8830 where we have a confluence of the daily SMA34 and middle line of the Bollinger bands. If price succeeds in breaking the support, we would be aiming towards the 161.8% extension level at around 0.8580/60, also coinciding with the weekly 61.8% retracement and confluence of the SMA34 and middle line of the bands.