The 3 Basic Types of Support and Resistance

Support and Resistance are determined by the balance between supply and demand of the market at a certain level, and imply the exhaustion of the previous selling or buying activity which then gives way to a temporary reversal (usually called pullbacks or retracements) of the trend, or a definite change in the market sentiment and the beginning of a new trend in the opposite direction.

Price will “stick” to certain levels, and also tends to come back much later on to the same areas repeating a previous behavior. Price itself is always a “horizontal” level in regard to successive time spans which form the vertical milestones, however there are many other ways to determine the probable areas where the price will stop and reverse or to calculate the next target when those areas are broken through.


The most common horizontal levels of support and resistance are Pivots and their projection levels, which will differ from one another according to the diverse styles of calculation (standard, Fibonacci, Camarilla, Woodies or Demark). Fibonacci retracements and extensions are another set of horizontal boundaries that traders employ quite often. Tight areas of consolidation will form strong baselines for probable rejection or breakthroughs of price action later on. Lines drawn from top or bottoms of swings, although weaker if not confirmed by other considerations, can act as probable levels where price could be expected to repeat a previous behavior. Finally, round numbers and psychological levels (00-20-33-50-66-80) are also to be considered in this type. 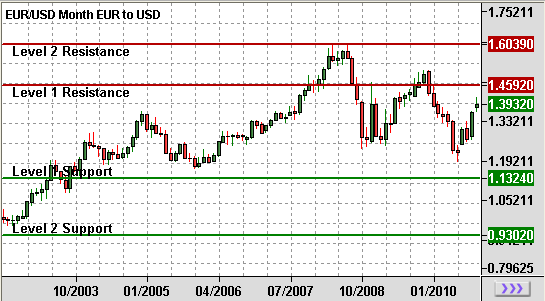 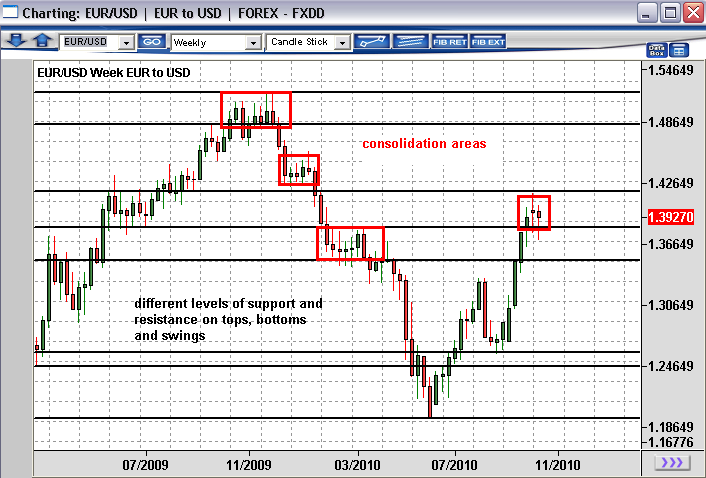 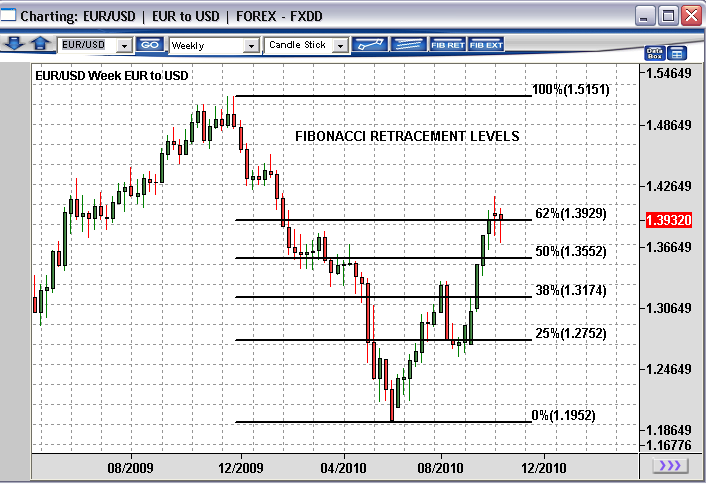 
These levels of support and resistance are mostly composed of Channels, Pitchforks, and of course, Trend Lines. Fibonacci fans also can be considered diagonal levels.

Trend lines are formed by connecting successive rising bottoms to show an uptrend, or consecutive falling tops to indicate a downtrend. At least two points are needed to be able to draw the line, and usually at the moment there is a third price level that respects the line it is said that the trend is confirmed. Of course, longer trends can have many more points coinciding along the way.

The duplication of the official trend line (connecting tops of the swing for a bearish trend and bottoms for a bullish trend) applied to the opposite points constructs a parallel channel, as it is shown on the following chart (blue lines).

There are many other channel indicators but one of the most used is the Andrew’s Pitchfork channel which includes a median line. The Pitchfork is also composed of a series of parallel lines and the behavior inside its boundaries is quite similar to that of the common trend channels. 
In this type we find Moving Averages, Bollinger Bands, Center of Gravity and many other similar indicators that constantly change in a non-linear way. With moving averages, the prices tend to find support at them when the trend is rising, and resistance when the trend has changed to the downside.

Bollinger Bands are used both to determine a probable reversion to the mean, or a continuation of the trend, depending on how the price action behaves near or at the outer band lines. 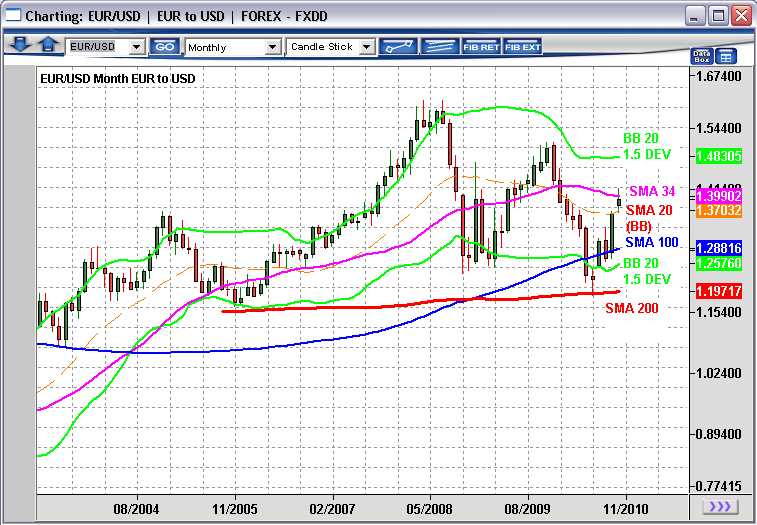 The question that remains is how much of the apparent predictability of such support and resistance levels is in fact the result of a self-fulfilled prophecy, as most of the market participants are using and reacting to the same instruments of measure, which in turn were devised and based on the observation of previous market behavior over time.